Documenting the Famine of 1932-1933 in Ukraine: Archival Collections on the Holodomor outside the former Soviet Union

On November 1‐2, 2019, the Holodomor Research and Education Consortium (HREC) at the Canadian Institute of Ukrainian Studies is holding a conference at the University of Alberta in Edmonton to examine materials related to the Holodomor that are found in archival collections outside of the countries of the former Soviet Union. Sources to be discussed at the conference include the archives of foreign governments and diplomatic correspondence, and the holdings of the émigré Ukrainian community as well as of minority groups and communities.

“With this conference, we aim to bring to light lesser known and under-researched sources related to the Holodomor and thus to encourage and stimulate further research and publication based on primary source materials,” said Dr. Bohdan Klid, Research Director for HREC.

When Robert Conquest’s The Harvest of Sorrow was published in 1986, scholars did not yet have access to Soviet archives. The first collections of archival materials on the Famine appeared in the second half of the 1980s, based on materials from the ministries of foreign affairs of countries that had diplomatic relations with the Soviet Union in the 1930s, including British, German, and Italian documents. These were followed by the publication of collections from Polish and Romanian archives. With the fall of the Soviet Union, Communist Party and Soviet government archives were opened, and an “archival revolution” commenced that lead to a surge in research on the Holodomor and many publications.

However, there remain diplomatic records as well as collections associated with immigrant and diaspora communities that have yet to be studied and published. Rich sources include materials from the Ukrainian pre-World War II immigrant and post‐World War II émigré communities, as well as from the Mennonite, Jewish, and other émigré communities that were in contact with and sought to aid their compatriots in Soviet Ukraine during the Famine.

A conference keynote address will be given by Ola Hnatiuk, a professor at the University of Warsaw (Centre for East European Studies) and at the National University of the Kyiv-Mohyla Academy (Department of History). Dr. Hnatiuk, who is the recipient of numerous awards and author of several books, including the often-cited Farewell to Empire (2003), will speak on “Reactions of Ukrainians to the Holodomor of 1932-1933 in Interwar Europe: New Discoveries and Sources.”

The conference is being organized by the Holodomor Research and Education Consortium at the Canadian Institute of Ukrainian Studies, Faculty of Arts, University of Alberta. Co-sponsored by the Department of History and Classics, Faculty of Arts.

9:45–11:45 | Panel One | Representations of the Famine of 1932–33 in the archival collections of émigré minority groups and communities

• Paolo Fonzi (Humboldt University of Berlin): “‘A trial of strength against the restive peasantry’: What the Germans knew about the Great Famine in the USSR and how they perceived it”
• Iryna Dmytrychyn (Institut national des langues et civilisations orientales): “Voyage enchanté d’Edouard Herriot”
• Eduard Baidaus (Red Deer College/Lakeland Community College): “Soviet collectivization and the Holodomor in Ukraine: Primary source materials in Romania and Moldova”

• Hiroaki Kuromiya (Indiana University Bloomington): “The Holodomor in light of Japanese historical sources”
• Andrii Bolianovskyi (National Academy of Sciences of Ukraine): “The US and the Holodomor: US State Department documents on collectivization and the Famine in Ukraine, 1929–34”

Ola Hnatiuk (National University of “Kyiv-Mohyla Academy” / University of Warsaw): “Reactions of Ukrainians in Interwar Europe to the Holodomor”

• Anastasia Leshchyshyn (University of Alberta): “Visualizing the Holodomor: The HREC Online Photo Directory”
• John Vsetecka (Michigan State University): “Toward a social history of the Holodomor: Famine survivor testimonies in the archive of the US Commission on the Ukraine Famine”
• Larysa Zasiekina (National University of Ostroh Academy / Anglia Ruskin University): “The Famine 1932–33 in Ukraine: Gaps in archival collections and memory recollections in East Ukrainian and Mennonite communities”
• Olga Klymenko (University of Alberta): “The Maniak Collection: Making available little-known witness accounts from the 1980s” 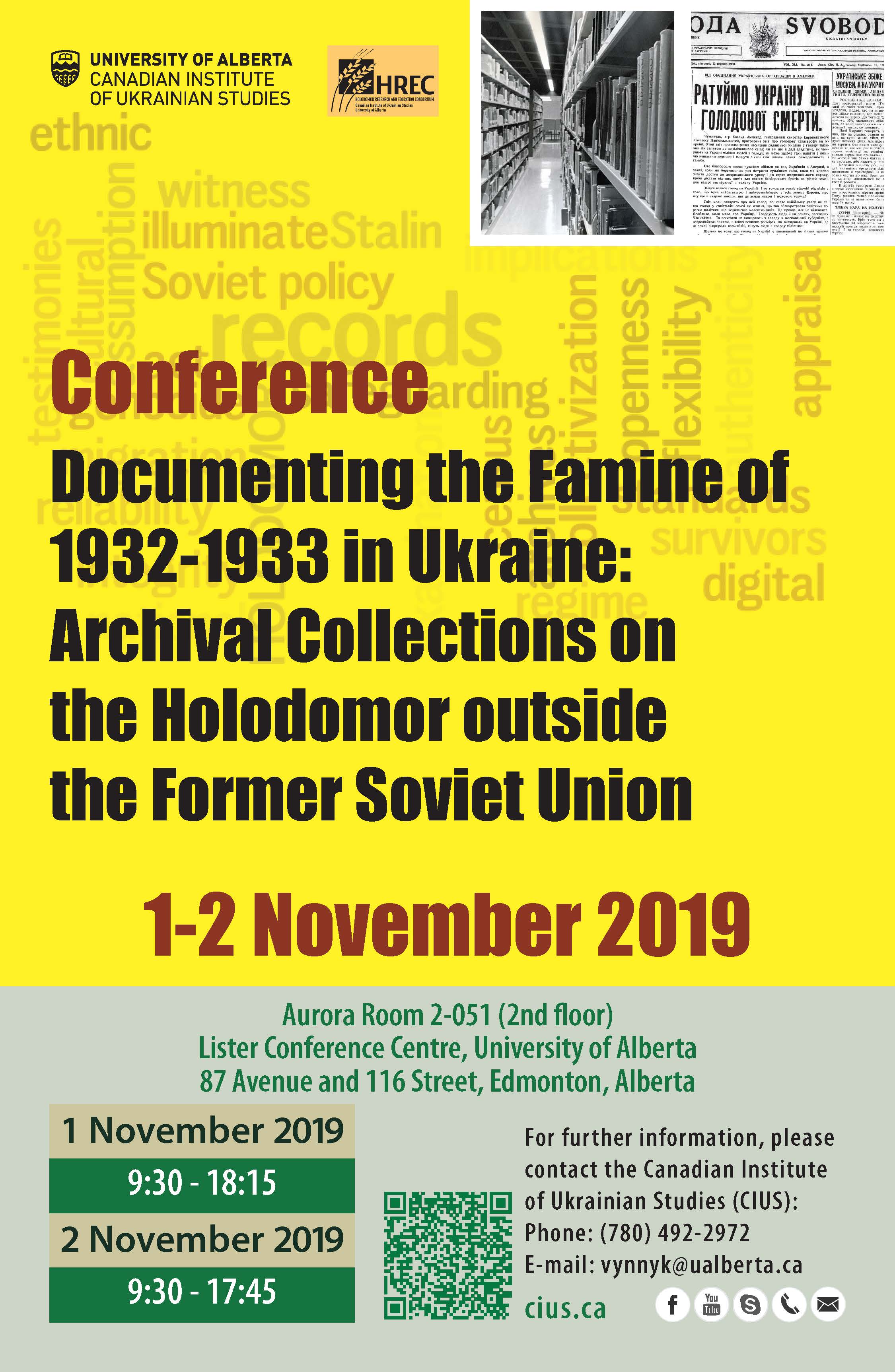