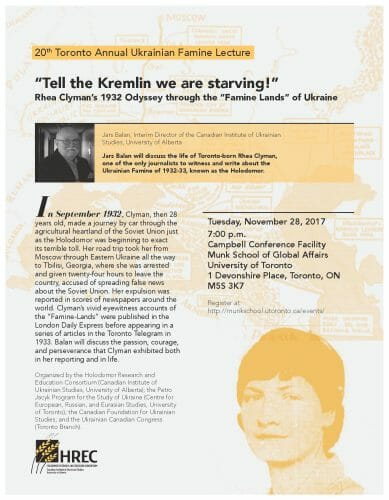 Tell the Kremlin we are starving; we have no bread!” Rhea Clyman’s 1932 Odyssey through the “Famine Lands” of Ukraine

Jars Balan discussed the life of journalist Rhea Clyman, one of the only journalists to witness and write about the Ukrainian Famine of 1932-33 known as the Holodomor. Raised in Toronto in a poor immigrant Jewish family, Clyman encountered adversity early in life, losing part of one leg in a streetcar accident. In September 1932, Clyman, then 28 years old, made a journey by car through the agricultural heartland of the Soviet Union just as the Holodomor was beginning to exact its terrible toll. Her road trip took her from Moscow through Eastern Ukraine all the way to Tbilisi, Georgia, where she was arrested and given twenty-four hours to leave the country, accused of spreading false news about the Soviet Union. Her expulsion, the first by Soviet authorities of a Western journalist in eleven years, was reported in scores of newspapers around the world. Clyman’s vivid eyewitness accounts of the “Famine-Lands” were published in the London Daily Express before appearing in twenty-one feature articles in the Toronto Telegram in 1933. Balan discussed the passion, courage, and perseverance that Clyman exhibited both in her reporting and in life.

THE TORONTO ANNUAL FAMINE LECTURE began in 1998 at the initiative of the Famine-Genocide Commemorative Committee of the Ukrainian Canadian Congress, Toronto Branch.