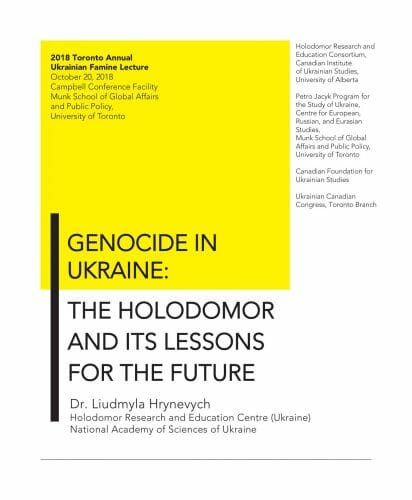 Genocide in Ukraine: The Holodomor and its Lessons for the Future

The 21st Toronto Annual Ukrainian Famine Lecture, delivered by Dr. Liudmyla Hrynevych, the Director of the Holodomor Research and Education Centre in Kyiv, was held on the second evening of the HREC genocide conference and marked its conclusion. A Senior Scholar at the Institute of the History of Ukraine, National Academy of Sciences of Ukraine, Dr. Hrynevych is a specialist on collectivization and the Holodomor and compiler of the multi-volume Khronika kolektуvizatsii i Holodomoru v Ukraini v 1927–1933 (Chronicle of Collectivization and the Holodomor in Ukraine, 1927–1933). Her monograph Holod 1928–1929 rr. u Radianskii Ukraini (Famine in Soviet Ukraine, 1928–1929) was published in 2013.

Dr. Hrynevych discussed the Holodomor in the context of theories of genocide and colonialism. Illustrating her points with visuals from the period of the Holodomor, she demonstrated how Soviet propaganda prepared the ground for genocide by using the press and the cinema to demonize the better-off Ukrainian peasants (kulaks) as enemies of the state.

Petro Jacyk Program for the Study of Ukraine (Centre for European, Russian, and Eurasian Studies, Munk School of Global Affairs and Public Policy, University of Toronto)