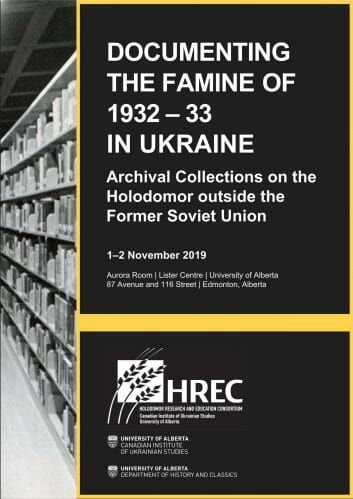 Documenting the Famine of 1932-1933 in Ukraine: Archival Collections on the Holodomor outside the former Soviet Union

On November 1‐2, 2019, the University of Alberta hosted scholars from seven countries who came together to discuss archival materials found outside of the former Soviet Union that contain materials related to collectivization and the Holodomor. According to HREC Director of Research Bohdan Klid, the conference “Documenting the Famine of 1932-1933 in Ukraine” achieved the aim of “bringing to light lesser known and under-researched materials and collections and of stimulating research and publication based on these primary source materials.”

The opening of Soviet archives after the fall of the USSR launched an “archival revolution” that lead to a surge in research on the Holodomor. Archives related to the Famine began to be published in the second half of the 1980s from the British, German, and Italian ministries of foreign affairs, and materials from Polish and Romanian archives followed. However, there are materials from countries including France, the United States, and Japan that remain unstudied. In addition, there are collections associated with immigrant and diaspora communities in Europe and North America that have yet to be closely investigated for Holodomor-related materials. In addition, there are materials from German and Jewish immigrants who came from Soviet Ukraine, as well as from Russians émigrés.

On the panel “Representations of the Famine of 1932–33 in the archival collections of émigré minority groups and communities,” Inna Gogina (University of Southern California) presented on representations of the Holodomor in the USC Shoah Foundation’s Visual History Archive; Colin Neufeldt (Concordia University of Edmonton), on the Holodomor as reflected in Mennonite archives and libraries in North America; and Gennady Estraikh (New York University), on the American Yiddish press on the privation of Soviet Ukraine’s peasants.

The second and third panels focused on reports from diplomats and representatives of foreign governments. Paolo Fonzi (Humboldt University of Berlin) presented on what the Germans knew about the Famine and how they perceived it; Iryna Dmytrychyn (Institut national des langues et civilisations orientales), on “Voyage enchanté d’Edouard Herriot”; and Eduard Baidaus (Red Deer College/Lakeland Community College), on primary sources in Romania and Moldova. Hiroaki Kuromiya (Indiana University Bloomington) discussed the Holodomor in light of Japanese historical sources, and Andrii Bolianovskyi (National Academy of Sciences of Ukraine) spoke on US State Department documents on collectivization and the Famine in Ukraine.  Volodymyr Kravchenko and Heather Coleman of the University of Alberta served as chairs, and Bohdan Klid and Olga Bertelsen (Embry-Riddle Aeronautical University), as commentators.

The first day concluded with a keynote lecture by Ola Hnatiuk (National University of “Kyiv-Mohyla Academy” and University of Warsaw) entitled “Reactions of Ukrainians in Interwar Europe to the Holodomor.” Dr. Hnatiuk is a professor at the Kyiv-Mohyla Academy and University of Warsaw and is vice-president of Ukrainian PEN-Centre. She served in the Polish diplomatic corps (2006–2010) and is the recipient of the  Polonia Restituta (Republic of Poland’s highest state award), the Antonovych Foundation Award for fostering Polish-Ukrainian cultural cooperation, and the Pruszynski Polish PEN-Club Award. Her most recent book Courage and Fear received awards in Ukraine and in Poland and is now available in English.

The second day began with the panel “Émigré Ukrainian community archives and collections.” Serge Cipko (University of Alberta) discussed what archival findings tell us about Canada’s response to the Holodomor; Bohdan Figol, representing the Ukrainian Canadian Research and Documentation Centre, discussed the holdings of that institution; Olga Andriewsky (Trent University) examined eyewitness collections of the early Cold War period; and Roman Wysocki (Maria Curie-Skłodowska University) presented on the Ukrainian Bureau in London and its documents related to the Holodomor. Frank Sysyn (University of Alberta) served as chair.

The final session was a forum for presentations on ongoing projects, moderated by Iryna Skubii (University of Alberta / Kharkiv Vasylenko National Technical University of Agriculture). Anastasia Leshchyshyn presented the HREC Online Photo Directory, a directory of photos from the Holodomor period that will “go live” in spring 2020;  John Vsetecka (Michigan State University) discussed the testimonies of the US Commission on the Ukraine Famine as social history; Larysa Zasiekina (National University of Ostroh Academy / Anglia Ruskin University) spoke on gaps in archival collections and memory recollections in East Ukrainian and Mennonite communities; and HREC’s Olga Klymenko presented on her work to make available Holodomor memoirs collected by Volodymyr Maniak in the 1980s, highlighting the most valuable aspects of the collection and development of an indexing system for aggregation that will improve discoverability and searchability. Professor Myroslav Shkandrij provided closing remarks. Conference participants visited the Holodomor Monument at Edmonton’s City Hall. The monument, erected in 1983 and designed by Ludmilla Temertey, was the first public monument commemorating the victims of the Holodomor.

Conference participants were enthusiastic about the prospect of contributing papers based on their presentations for publication in a special issue of the journal East/West. The issue will be guest edited by Professor Shkandrij. The conference was co-sponsored by the University of Alberta’s Department of History and Classics, Faculty of Arts and was the sixth HREC conference organized with the aim of engaging scholars from a range of academic disciplines in explorations of the Holodomor.

Department of History and Classics, Faculty of Arts, University of Alberta