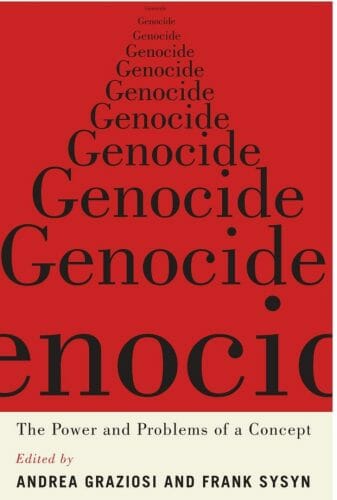 Now Available — Genocide: The Power and Problems of a Concept

This volume contains articles based on papers presented at the conference “Genocide in Twentieth-Century History: The Power and the Problems of an Interpretive, Ethical-Political, and Legal Concept,” which was held in October 2018 at the University of Toronto and organized by HREC together with the Institute for Holocaust, Genocide, and Memory Studies at
the University of Massachusetts, Amherst.

Since the 1980s the study of genocide has exploded, both historically and geographically, to encompass earlier epochs, other continents, and new cases. The concept of genocide has proved its worth, but that expansion has also compounded the tensions between a rigid legal concept and the manifold realities researchers have discovered. The legal and political benefits that accompany genocide status have also reduced complex discussions of historical events to a simplistic binary – is it genocide or not? – a situation often influenced by powerful political pressures.

Genocide addresses these tensions and tests the limits of the concept in cases ranging from the role of sexual violence during the Holocaust to state-induced mass starvation in Kazakh and Ukrainian history, while considering what the Armenian, Rwandan, and Burundi experiences reveal about the uses and pitfalls of reading history and conducting politics through the lens of genocide. Contributors examine the pressures that great powers have exerted in shaping the concept; the reaction Raphaël Lemkin, originator of the word “genocide,” had to the United Nations’ final resolution on the subject; France’s long-held choice not to use the concept of genocide in its courtrooms; the role of transformative social projects and use of genocide memory in politics; and the relation of genocide to mass violence targeting specific groups.

Throughout, this comprehensive text offers innovative solutions to address the limitations of the genocide concept, while preserving its usefulness as an analytical framework.

You can purchase a copy of the volume at the following locations: