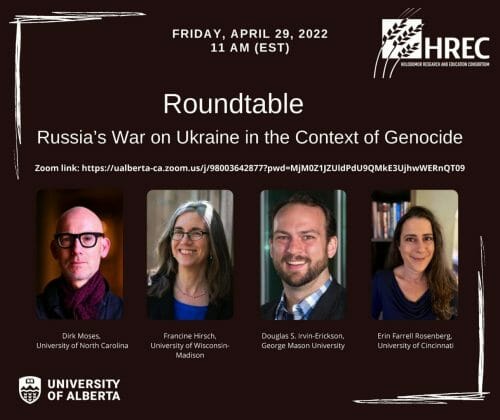 Roundtable “Russia’s War on Ukraine in the Context of Genocide”

On April 29, HREC held the online roundtable “Russia’s War on Ukraine in the Context of Genocide” featuring leading experts on genocide Dirk Moses (University of North Carolina), Francine Hirsch (University of Wisconsin-Madison), Douglas S. Irvin-Erickson (George Mason University) and Erin Farrell Rosenberg (University of Cincinnati). HREC aimed with the roundtable to prompt consideration of Russia’s war on Ukraine in the broader context of genocide studies and to discuss the possibility and challenges of prosecuting the perpetrators. Since Russia’s full-scale invasion of Ukraine began, there are increasing reports of atrocities that likely amount to war crimes and genocide, including the withholding of humanitarian aid and starvation, and Ukrainian and foreign media have reported on the murder of many civilians and sexual violence. Russian officials deny responsibility and dismiss as “staged fakes” the crimes documented in the liberated areas in the Kyiv region or accuse Ukrainians of committing the atrocities. At the same time, Russian state media outlets openly promote genocidal rhetoric, calling for the “solution of the Ukrainian question”.

During the virtual roundtable, presenters discussed the Russian invasion in the context of genocide theory and law and the limitations and challenges, both in definition and application. Presenters explored the origin of the concept of genocide and issues related to its legal application related to the narrow UN definition rooted in the post-Second World War political environment. In contrast to the term as originally conceived by Raphael Lemkin, the legal definition as reflected in the Genocide Convetion imposes almost impossible standards that make prosecution of states and individuals engaged in genocidal violence in the context of the colonial wars highly problematic. Legal expert Erin Farrell Rosenberg (University of Cincinnati) focused on state responsibility under the Genocide Convention, specifically on the obligation to prevent genocide, and the legal mechanisms and precedent that already exist which can be used to pressure Russia to withdraw its forces from Ukraine.

Listen to the recording here.