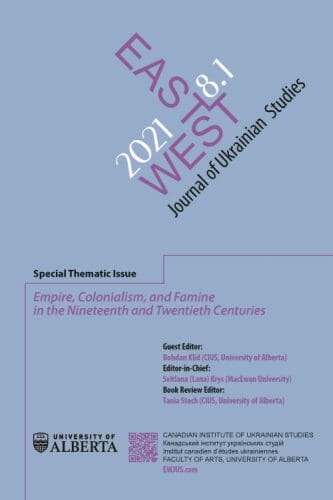 Vol 8, no 1 (Spring 2021) of  East/West: Journal of Ukrainian Studies (EWJUS) is a special thematic issue, titled “Empire, Colonialism, and Famine in the Nineteenth and Twentieth Centuries.”

EWJUS is an open access, peer-reviewed, academic journal launched by the Canadian Institute of Ukrainian Studies at the University of Alberta in 2014.

In the words of guest editor Bohdan Klid of HREC/CIUS, “This volume consists of essays that examine the connection between empire building, imperial rule and famine. Contributions include papers on famine and food policies during World War II connected to empire-building in occupied Ukraine and Moldova, as well as on famines in Soviet Ukraine, British-ruled Ireland and India, and Mao’s China. One essay compares the Irish and Ukrainian famines in the context of internal colonialism and alien rule. Another examines Raphael Lemkin’s views on genocide and famine. An introductory essay looks at recent literature on famine theory and on empires and famine, and reflects on the articles contained in the volume. The collection demonstrates that famines that have occurred during wartime in occupied territories and in overseas colonies or peripheral regions (internal colonies) of empires can be fruitfully studied within the context of empire building, imperial policies, and colonial rule. The volume grew from the proceedings of conferences held in Toronto (2016) and Kyiv (2017) organized by the  Holodomor Research and Education Consortium (HREC). HREC is a project of the Canadian Institute of Ukrainian Studies, University of Alberta, established through funding from the Temerty Foundation.”

The issue also features an array of reviews, two review articles of recent titles in Ukrainian studies, and an obituary for Bohdan Medwidsky, the founder of the Kule Folklore Centre and the Bohdan Medwidsky Ukrainian Folklore Archives at the University of Alberta.

Since EWJUS is an open access journal, all visitors to the site have immediate, free access. Readers are also welcome to register with EWJUS on the site in order to receive future updates.