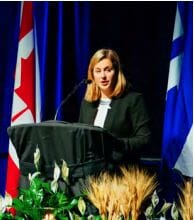 HREC was consulted on preparations for the unveiling of Toronto’s Holodomor Memorial Parquette, a permanent memorial to the victims of the Holodomor. The memorial unveiling, held on October 21, marked a milestone for Toronto’s Ukrainian community. The event was attended by distinguished guests including Canada’s Minister of Foreign Affairs Chrystia Freeland, Mayor of Toronto John Tory, the First Vice-Prime-Minister – Minister of Economic Development and Trade of Ukraine Stepan Kubiv, Consul General of Ukraine in Toronto Andriy Veselovsky, and MP James Bezan. HREC’s Anastasia Leshchyshyn served as the Master of Ceremonies for a Community Reception at the Beanfield Centre that followed the unveiling.